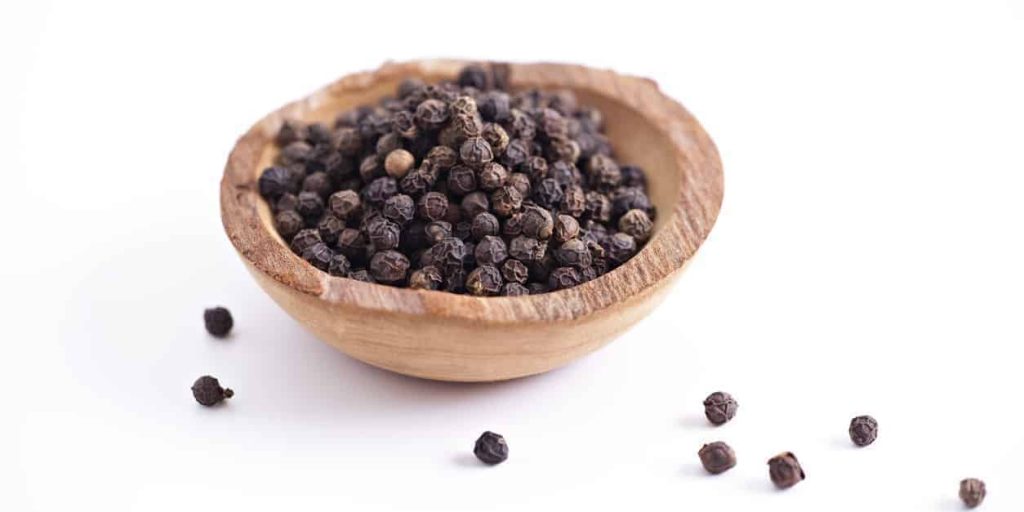 What Is All The Fuss About BioPerine?

Chances are you have black pepper somewhere in your home. While this common cooking ingredient can certainly spice up a meal, it also contains something that can be beneficial to your health and that something is Piperine.

Piperine, an alkaloid which occurs in the largest quantities in the outer layer of the grain, is responsible for the characteristic, spicy taste of black pepper (Piper nigrum). It’s also the reason black pepper has a long history of medicinal uses. 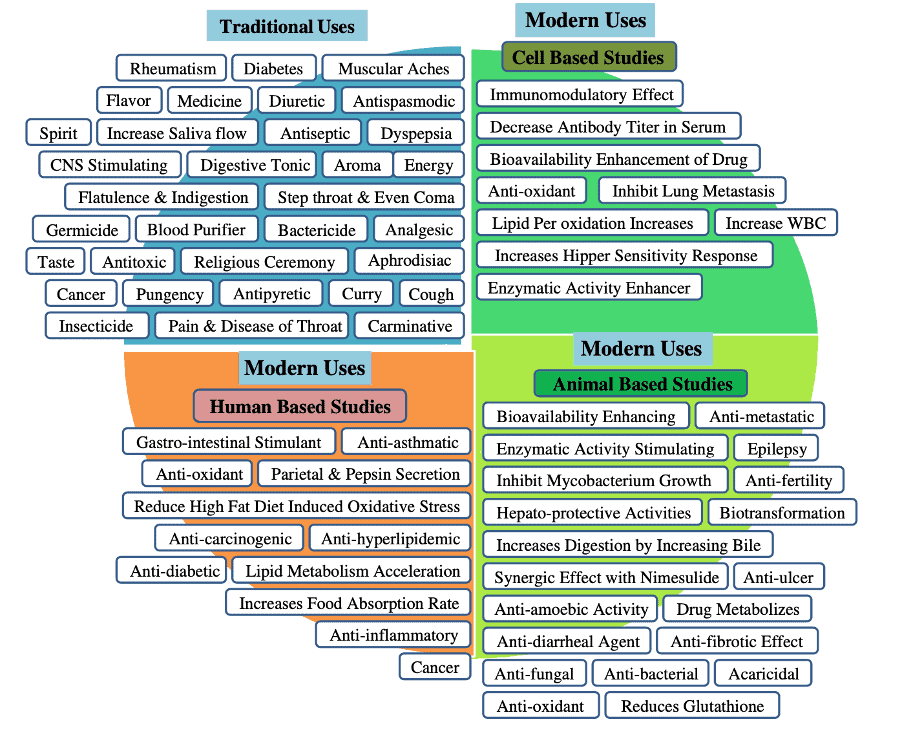 Studies have shown that Piperine has lots of health properties including:

But it’s not these actions that I wanted to focus on today. It’s a different action of Piperine or more specifically BioPerine that I wanted to highlight and that is its activity as a bioenhancer.

To start with, black pepper only contains around 1%-5% Piperine and it isn’t very bioavailable which means it’s difficult for the body to absorb and make use of. For this reason, a patented extract obtained from black pepper has been formulated which has been standardised to contain a minimum of 95% Piperine and in a bioavailable form which means it’s easily absorbed and utilised by the body.

You might have noticed BioPerine listed as an ingredient in different supplement formulas. The reason for this is its action as a bioenhancer. Multiple studies have shown that when BioPerine is co-administered with various nutrients or herbs, it enhances their bioavailability. In general, BioPerine was found to enhance absorption of nutrients by at least 30%. 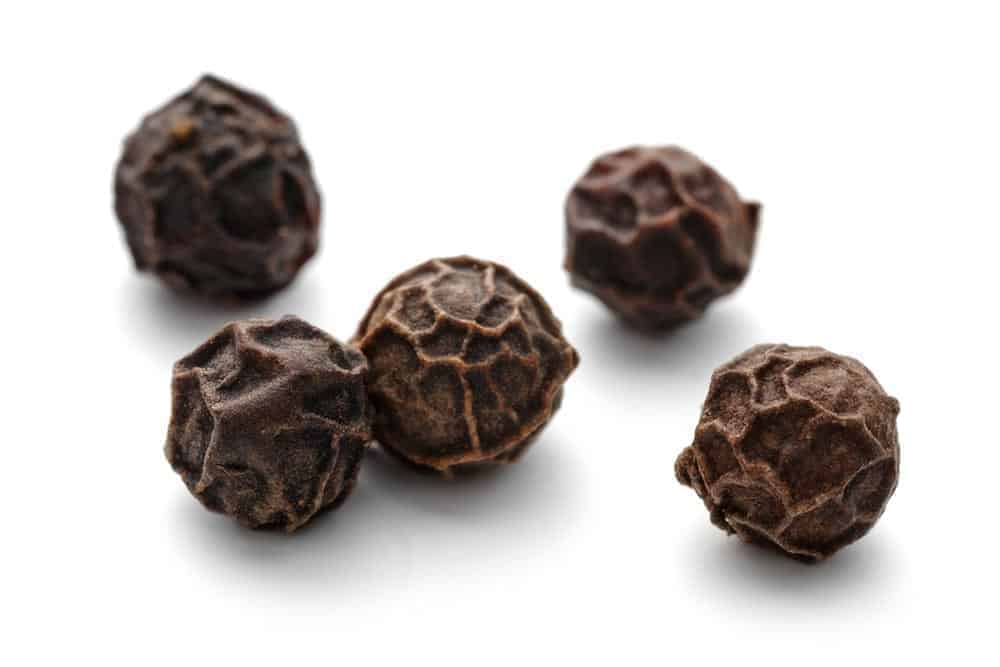 You might be under the impression that when you take a nutritional or herbal supplement, your body absorbs and makes use of the entire amount of herb or nutrient it contains. Unfortunately, that is not the case.

How much of a particular herb or nutrient your body can absorb and make use of depends on its bioavailability.

Bioavailability is defined as the degree and rate at which a compound is absorbed into a living system or is made available at the site of biological activity. So how much is absorbed and available to be used by the body.

The more bioavailable something is, the more you are going to absorb and the more that is available to be used by the body and have therapeutic effects.

There are other factors that can affect the absorption of nutrients and herbs that are more dependent on the person taking the supplement such as their age, digestive system integrity and overall state of health.

Why does this matter?

If you’re taking the time and spending the money on herbal and nutritional supplements, you obviously want to get as much benefit from them as you possibly can don’t you. You’re taking them for a reason. What’s the point of taking something that your body can’t really absorb or make use of?

There are certain herbs and nutrients that are known to have low bioavailability. What that means is that we know the body either has a hard time absorbing the beneficial compounds they contain or breaks them down before the body can make use of them.

How does BioPerine act as a Bioenhancer?

I mentioned that BioPerine is added to some supplement formulas to enhance their bioavailability but how does it actually do this? 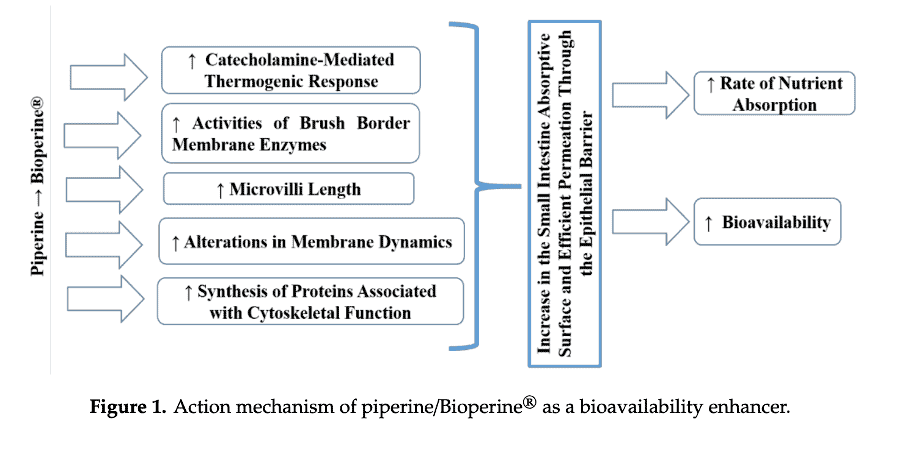 One of the ways that it does this is by acting on the gastrointestinal tract. BioPerine increases the activity of enzymes in the gastrointestinal tract- improving the breakdown of vitamins, minerals and herbal extracts. It also increases the surface area of the gut and alters the structure of the gut membrane meaning there’s more room for absorbing the vitamins, minerals or herbs and it’s easier to absorb them.

BioPerine also acts as a thermonutrient. It supplies your body with a higher amount of thermal energy. This thermal energy powers the thermogenesis process which leads to an increase in your body’s demand for nutrients, which spurs metabolism and increases absorption through the gastrointestinal tract.

BioPerine also slows the metabolism and elimination of certain herbs and nutrients so they don’t get broken down as quickly, meaning they have more opportunity to exert their beneficial effects on the body.

Certain herbs and nutrients aren’t particularly well absorbed by the body when taken in supplemental form or they may be broken down too quickly by the body, before they are able to have a therapeutic effect.

It is in cases like this that BioPerine is super helpful in order to maximise the absorption and utilisation of these supplements and so certain formulations have BioPerine added to them.

According to clinical reports, having BioPerine ‘in the right place at the right time’ is important when it comes to enhancing the absorption of herbs and nutrients. What this means is that BioPerine has to be taken at the same time as the herbs or nutrients you are looking to boost the absorption of which is why it is typically added to the formulation.

Studies have shown that when certain herbs, vitamins, minerals and antioxidants are administered alongside BioPerine, their absorption is significantly increased.

One notable mention is CoQ10.

CoQ10 is a key supplement when it comes to treating kidney disease thanks to its antioxidant, anti-inflammatory and energy boosting properties (if you want to know more about CoQ10, check out my CoQ10 blog post here).

Now, unfortunately, CoQ10 falls into the category of supplements that are difficult for the body to absorb which has prompted researchers to try to find ways to improve the absorption of CoQ10 to ensure we’re getting the full benefit from CoQ10 supplementation.

BioPerine has been shown to significantly increase the absorption of CoQ10 supplements.

What does that mean?

It’s not just herbs and nutrients that BioPerine can increase the bioavailability of, it can have a similar effect on some drugs as well. Studies have shown that when 20mg of Piperine is given alongside the following medications, drug levels are increased: carbamazepine, phenytoin, propranolol, theophylline and fexofenadine. Care should also be taken with drugs that have a narrow therapeutic index eg. digoxin and cyclosporine.

So there you have it, a crash course in BioPerine and why it is added to some nutritional and herbal formulas. If you’ve ever noticed BioPerine as one of the ingredients in your natural medicine supplements- now you know why it’s there!

If you found this article useful please let me know by clicking the ‘SHARE’ button below and feel free to leave a comment on our Facebook page.