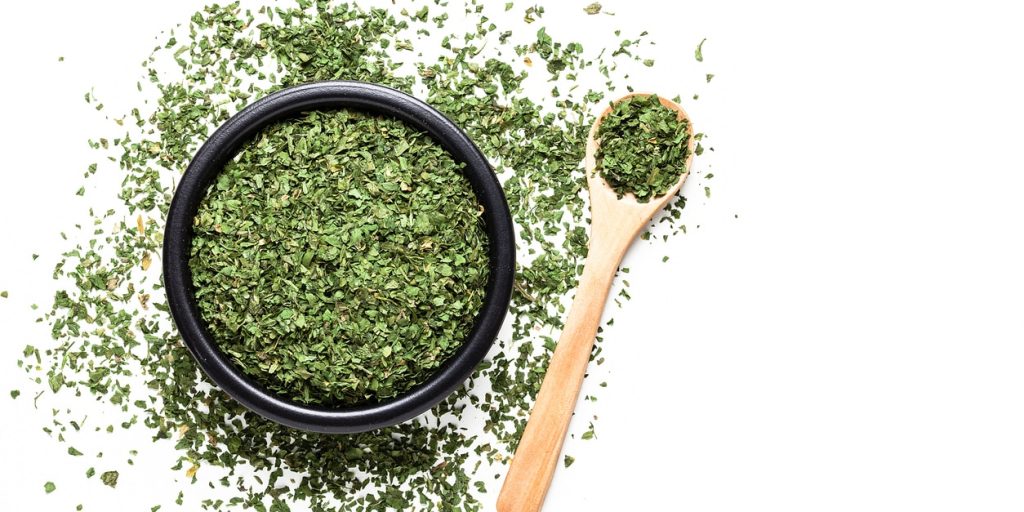 Parsley would have to be one of the world’s most popular culinary herbs. Grown for its tasty green leaves, parsley provides a source of vitamin C, iron and vitamin A. It is a member of the carrot family and native to the Mediterranean. The word parsley comes from the Greek, meaning ‘rock celery’. Parsley became popular throughout Europe in the Middle Ages, where it was commonly grown in monasteries and royal gardens. Parsley has a rich folklore and history behind it, there was a time when there was superstition surrounding the herb, it was believed parsley could only be grown by pregnant women and witches.

Apparently, banqueting Greeks wore parsley crowns to stimulate their appetite and promote good humour. Traditionally parsley is known as a warming food and blood tonic with an affinity for the bladder, kidney and stomach meridians. Parsley contains a volatile oil, apiol, which has carminative, circulatory stimulant, aromatic digestive and urinary antiseptic properties.

As kidney disease is one of the world’s leading public health issues, it is important to asses the significant role plants may play in this area of health.

Contraindications- The seed and heavy consumption of the seed should be avoided in pregnancy. Renal failure.

Preparation- Obviously we use parsley as a culinary herb, it is also taken as an infusion and the root and seeds are taken as a decoction. Herbal preparations are also found in tablet/capsule form and as a liquid herbal extract. 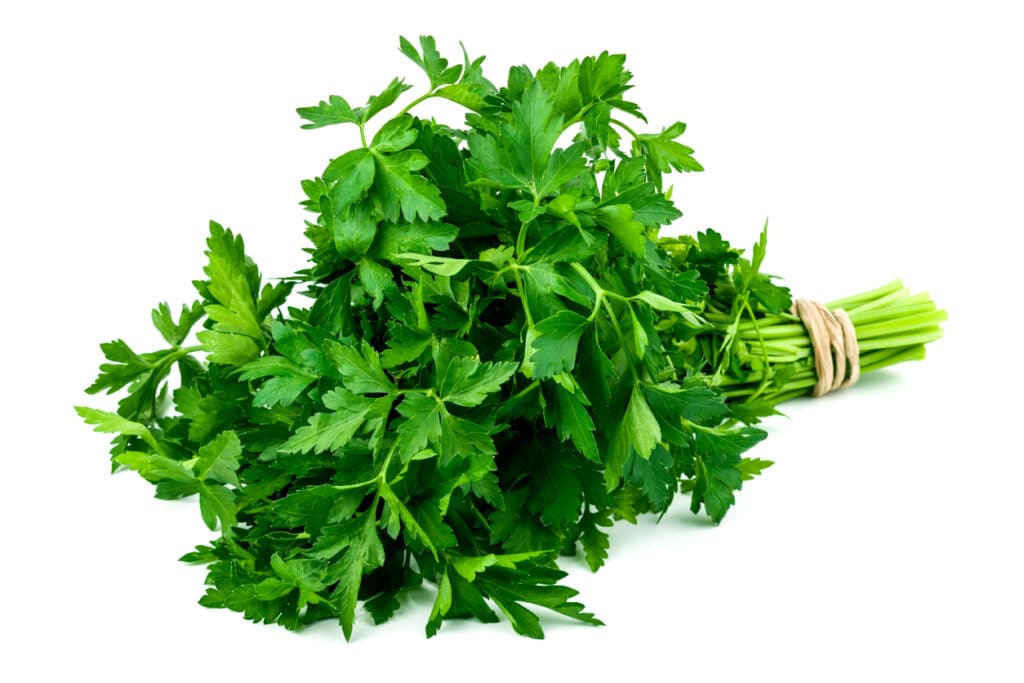 Parsley is used by herbalists for its diuretic, emmenagogue, expectorant, carminative, antispasmodic and hypotensive actions. Due to some of the parsley’s constituents, it has been long credited as a strong diuretic and the seed especially has been used for oedematous conditions and urinary stones. As mentioned, it is also a close relative to celery and like celery seed, it has been found to increase the elimination of acidic metabolites giving it an application in conditions such as gout and arthritic conditions.

I’m sure most of you have used the fresh herb in cooking!  Parsley provides a rich source of vitamins A, C and K. In traditional medicine, parsley has three main areas of usage; an effective diuretic, as an emmenagogue to stimulate the menstrual process and thirdly as a carminative to ease colic pain and wind. I will be focusing on its actions on the kidney and its application in kidney stones and supporting healthy blood pressure to help prevent further kidney damage.

Kidney stones and the formation of stones is one of the oldest known diseases of the urinary tract, unfortunately with a relapse rate of 50% every 5-10 years. It is the third most common health issue found in urinary disease. The prevalence of stones has been found to be higher in males (10%) during a lifetime, compared to females (3%), although newer studies are now showing a shift of prevalence to stones in females almost equal to males. The aetiology behind the condition is multifactorial, complex and not entirely understood.

Symptoms of renal stones will vary from no symptoms at all to:

These symptoms may lead to urinary urgency, frequency and/or upset stomach.

About 85% of stones are composed of calcium, the remainder is composed of various substances such as uric acid, cystine or struvite.

Stones may form when the urine becomes saturated with salts that have the ability to cause a stone or it can be due to the urine lacking the normal inhibitors of stone formation. Stones are also often seen in people with certain disorders such as hyperparathyroidism, dehydration and renal tubular acidosis. People who have had bariatric surgery may also be at an increased risk of stone formation.

Genetics, diet, excess body weight, certain supplements and medications are also among the many causes of kidney stones.

A 2018 study published in the International Journal of Molecular Sciences reported that the various pharmacological actions parsley possessed; were found to have antioxidant, anti-inflammatory, diuretic, nephron-protective and anti-hypertensive activity. The study showed the beneficial actions may be due to its constituents which include flavonoids, carotenoids, coumarins, ascorbic acid and tocopherol. Research showed parsley prevented the nucleation and precipitation of calcium oxalate and urine supersaturation in a rat model of calcium stone formation. The authors concluded the high content of chlorophyll and magnesium within parsley was a potential reason for its inhibitory effect towards dehydration of calcium oxalate and excessive oxalate production. Parsley was found to be effective in regulating urinary pH where calcium oxalate crystals could be maintained as dispersed particles and their elimination facilitated. The study concluded parsley may be used as a promising anti-urolithiasis remedy.

The American College of Cardiology and the American Heart Association divides hypertension into 4 categories: 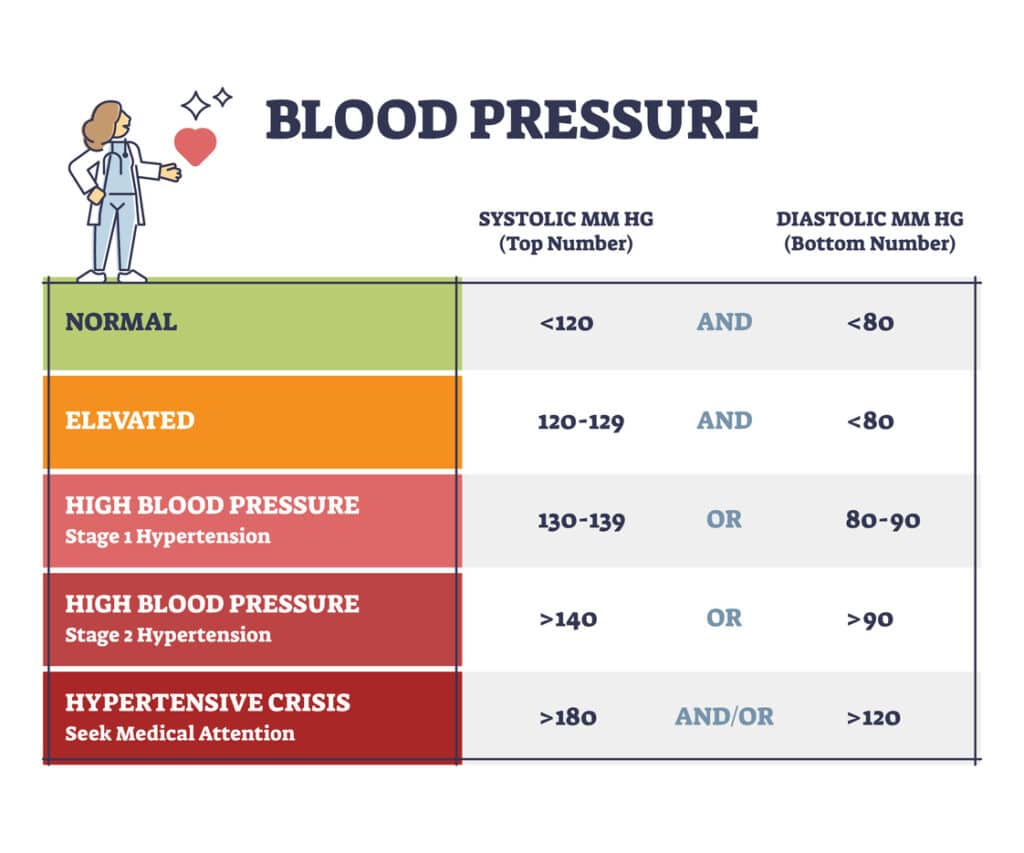 Hypertension can cause a variety of other health concerns such as:

The following symptoms aren’t specific, they usually don’t occur until hypertension is severe or life-threatening.

Parsley has been found to be high in nitrates, nitrates help dilate the blood vessels which will improve the blood flow and support healthy blood pressure. Evidence indicates, nitrates consumed via the diet lowers blood pressure in healthy humans. Nitric oxide (NO) plays an important part in maintaining vascular homeostasis, reduced NO production or bioavailability has been associated with cardiovascular and metabolic diseases. Evidence accumulated in a 2013 study concluded a dose of nitrate as low as 3 mmol reduced systolic blood pressure by 3 mmHg. Authors suggested the potential mechanism by which dietary nitrate supports healthy blood pressure and improves endothelial function is due to the ability to increase vasodilation; inhibiting mitochondrial reactive oxygen species production and platelet aggregation.

Carotenoids are a class of fat-soluble pigments mainly found in plants, they have been found to possess potent anti-inflammatory properties and may help support healthy blood pressure via the reduction of pro-inflammatory cytokines and markers of inflammation. Parsley contains three carotenoids, lutein, zeaxanthin, and beta-carotene. A 2015 study looking at carotenoids and their potentially positive role in supporting cardiovascular health found that anti-inflammatory activity may help fight against cardiovascular risk factors such as hyperlipidaemia, hypertension, insulin resistance and obesity.

As well as being a tasty culinary herb, you can see parsley can play a potential role in supporting healthy blood pressure and may be a suitable choice in the management of urinary stones. Please remember as with any dietary/ supplemental change in those with a chronic health concern, to make sure you consult your health professional first.