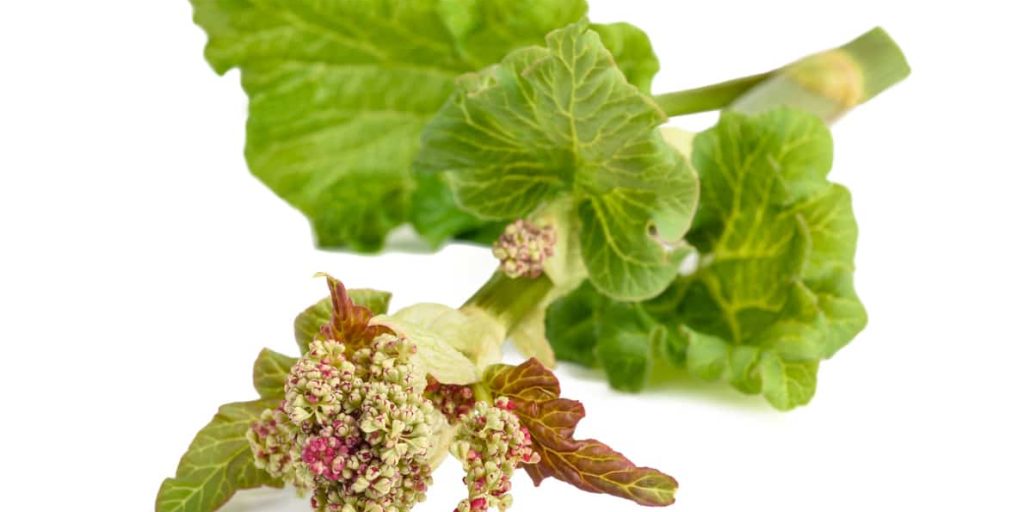 Rheum palmatum (Chinese rhubarb) is a clump-forming perennial grown primarily for its huge dark green leaves. It looks great as an accent plant around borders or near streams and ponds. However, did you know, its role has been medicinal rather than culinary during most of its period of use. Medicinally rhubarb dates back more than 5,000 years ago, compared to its culinary use of only two centuries ago. Due to the trade between Venice and the Orient rhubarb was brought to Europe and used medicinally at the beginning of the 17th century.

Dosage- The World Health Organisation recommends between 10-20 mg of anthracene derivatives (the active ingredients) per dose. 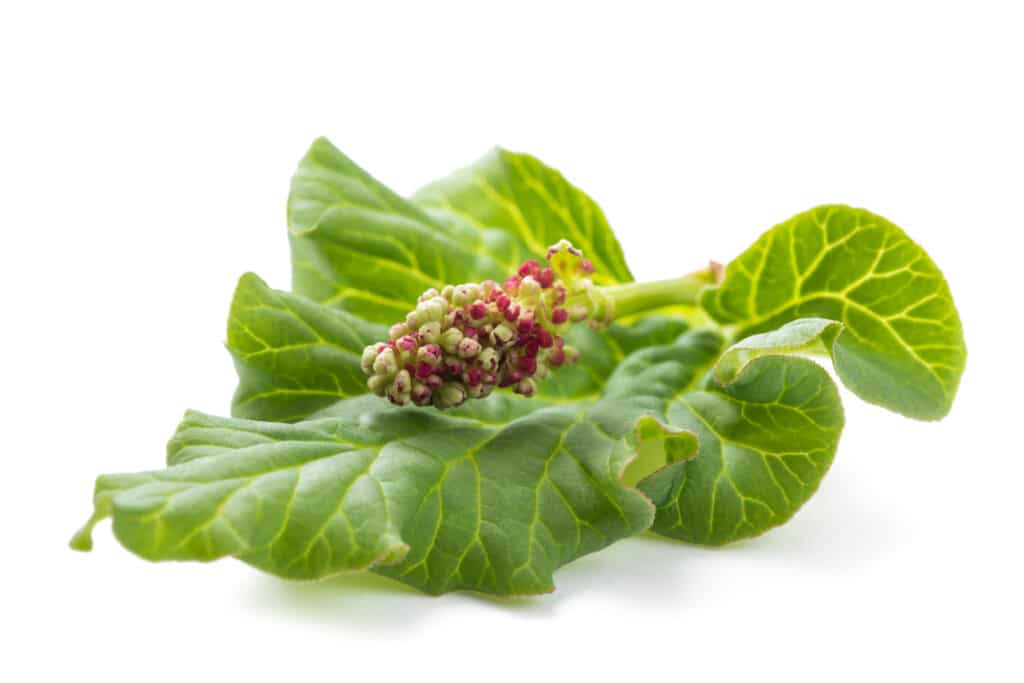 Traditionally, Rhubarb is said to be effective in reducing toxicity resulting from the overconsumption of meat. It is known as a sour, astringent and cooling food that helps remove toxins and heat, it also supports healthy blood circulation. Due to its cooling properties, in traditional medicine, it is known as an excellent food to help cool an inflamed liver for detoxification after eating too much rich food.

The traditional use of rhubarb has been as a laxative to relieve constipation and as a purgative. Other proposed uses of the plant are as follows;

As I mentioned, in TCM rhubarb also belongs to the ‘purgative herbs that drain downward’, herbs that belong to this category are used to treat constipation. Purgatives work by removing Excess Heat in the intestines and/or stomach. In TCM, all herbs within this category are cold in nature, and we know the theory; cold reduces heat. As rhubarb is cold in nature, typically herbalists will use it for people with too much Heat present in their system.

Chinese Medicine also works on the theory that the taste of herbs/foods determines their action on the body. Rhubarb is bitter, once again, meaning it tends to have a cleansing action on the body, this occurs by clearing Heat, drying Dampness, and providing elimination via urination or bowel movements.

What is Metabolic Syndrome?

Diabetes is the number one cause of kidney disease; it is present in almost 43.8% of all cases. Apart from being a major risk factor for cardiovascular disease, metabolic syndrome has been associated with an increased risk of chronic kidney disease.

The basic components that make up metabolic syndrome are hypertension, obesity, type 2 diabetes Mellitus and low-high-density lipoproteins. The cluster of symptoms increases the risk of heart disease, stroke and type 2 diabetes. It doesn’t mean you have metabolic syndrome if you have one of these symptoms, however, it does mean you may have a greater risk of serious disease.

Metabolic syndrome may not necessarily have obvious signs or symptoms. One sign that is obvious is an increase in waist circumference. If your blood sugar levels are high you may notice the signs and symptoms associated with diabetes, such as an increase in thirst, urination, fatigue and blurred vision.

Compensatory increases in plasma insulin, when insulin resistance becomes worse, have been found to trigger mechanisms that will directly or indirectly increase renal sodium reabsorption and will also impact sympathetic nervous system activity. If this continues to occur, these changes can lead to an increase in blood pressure, leading to hypertension in patients with metabolic syndrome. Studies have also shown hyperinsulinemia can contribute to hypertension. It has been shown insulin can have an antinatriuresis effect. These studies support the hypothesis that acute hyperinsulinemia can stimulate renal tubular sodium absorption and if this continues will lead to an increase in blood pressure. 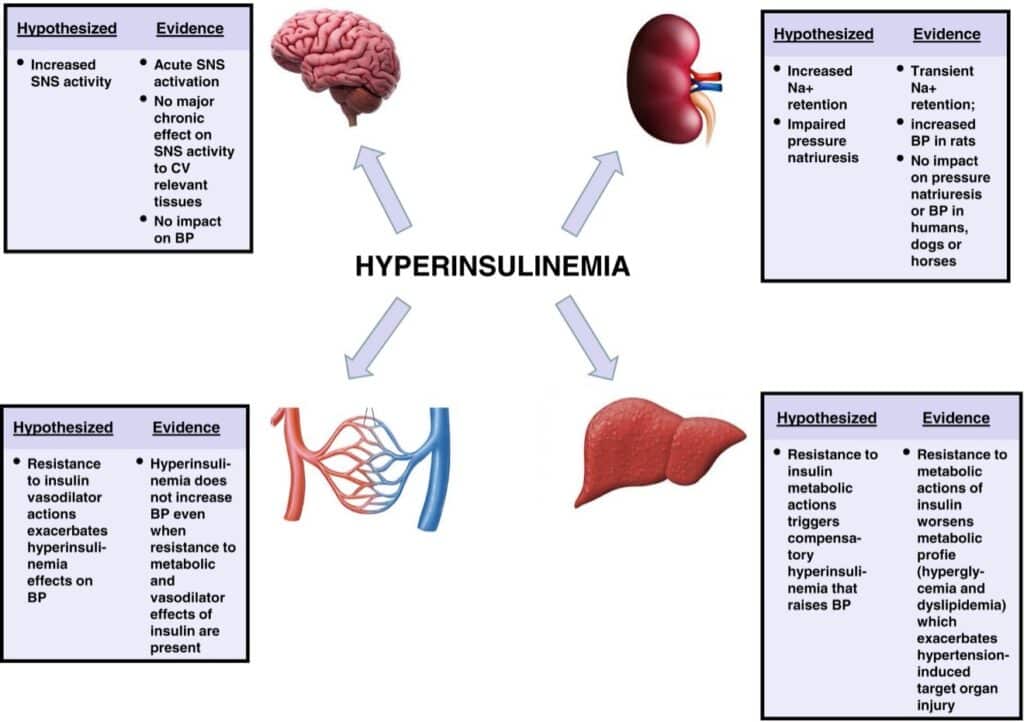 Rhubarb contains anthraquinones rhein, emodin and aloe-emodin. It is these derivatives that support the elimination of nitrogenous products through the alimentary system and the regulation of water and electrolyte metabolism.

The treatment for CKD-ESRD (end-stage renal disease) is renal replacement therapy, which includes renal transplantation and dialysis. As this is costly, required lifelong, and is not suitable for many, with many complications, conservative therapy is employed instead.

A 2014 randomised clinical trial evaluated the efficacy and safety in the use of rhubarb in patients with CKD. The study was conducted on patients with CKD stages 3 and 4. Patients were randomly divided into two groups; Group 1 (Control) received conservative management, whilst Group II (Rhubarb) received conservative treatment along with a Rhubarb capsule (350mg, thrice daily) for the duration of 12 weeks.

Renal function tests and haemogram were measured at 0, 4, 8 and 12 weeks of treatment. The authors found clinical features were improved in both groups by week 12, however, the rhubarb group showed a marked improvement compared to the control group. Both groups also showed a gradual improvement in biochemical parameters, once again, a marked improvement in the rhubarb group. The authors found there was a reduction in blood glucose levels, blood urea, 24-hour total urine protein and serum creatinine. There was an increase in haemoglobin, 24-hour total urine volume and glomerular filtration rate. They concluded, rhubarb supplementation actually improved the therapeutic effect of conservative management in stages 3 and 4 of CKD.

Evaluation of Rhubarb Supplementation in Stages 3 and 4 of Chronic Kidney Disease: A Randomized Clinical Trial (hindawi.com)

As rhubarb has a strong cathartic effect, it has been thought to increase the excretion of waste products in the body, this includes the nitrogenous waste which is accumulated in those with renal failure, via the intestines. The anthraquinones emodin and rhein play a role in regulating inflammation and the immune response. In animal studies, emodin and rhein have been shown to decrease proteinuria and glomerulosclerosis. Other clinical studies have shown as well as reducing proteinuria and improving renal function, rhubarb may cause a further reduction of proteinuria and improved renal function when combined with angiotensin-converting enzyme inhibitors.

As you can see rhubarb shows a lot of potential in supporting patients with kidney disease. The traditional use of rhubarb also offers a very different perspective on its use and its actions, which is well worth considering!

I hope you found this article helpful.

Please remember as with any dietary/ supplemental change in those with a chronic health concern, to make sure you consult your health professional first.