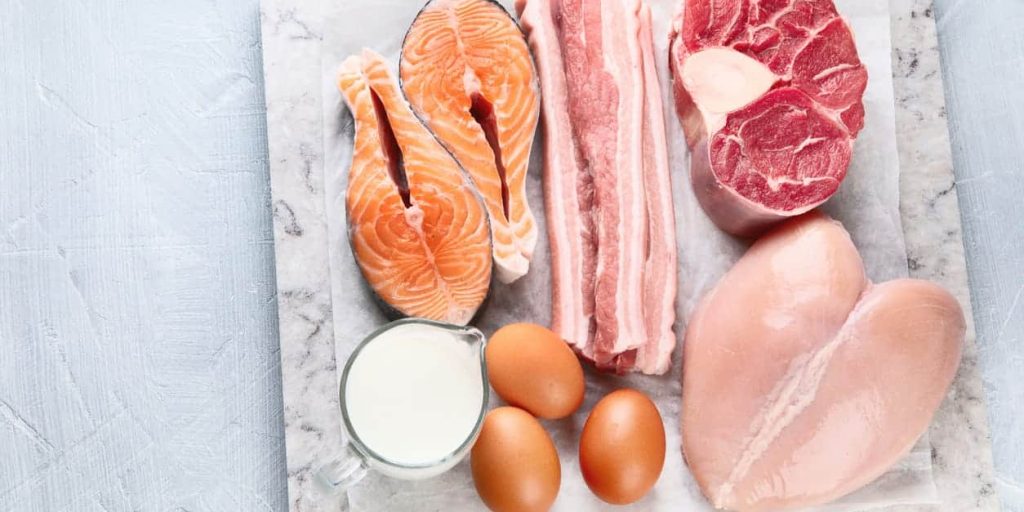 Today I wanted to discuss a lesser-known compound that has been linked to the development and progression of kidney disease, cardiovascular disease and diabetes, among other health conditions and that compound is called TMAO. 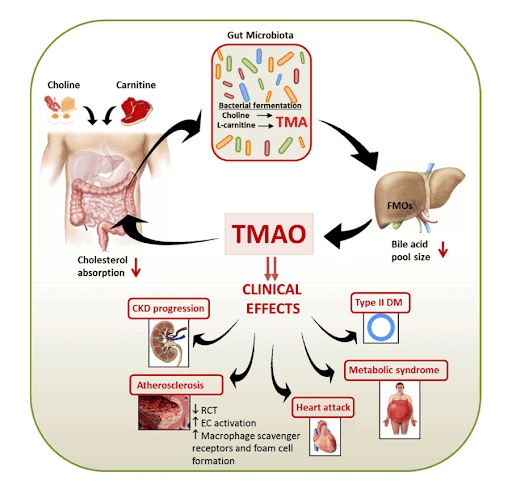 TMAO (or Trimethylamine-N-oxide) is a metabolite produced by gut bacteria from choline, phosphatidylcholine and L-carnitine rich foods (mainly fish, meat, eggs and dairy). When consumed, these nutrients are processed by gut bacteria resulting in the release of various metabolites including TMA (Trimethylamine) into the blood. TMA is then transported to the liver where it becomes oxidised into TMAO, primarily by the enzyme FMO3. TMAO is then excreted in the urine.

Elevated levels of TMAO in the body have been linked to a wide variety of diseases including:

What causes high levels of TMAO?

Diet plays a key role in the generation of TMAO. The foods best known for increasing TMAO levels are animal products, particularly red meat, dairy products, eggs and fish because these foods are highest in choline and carnitine which gets converted into TMAO by gut bacteria. Recent research has shown that between choline and carnitine, dietary carnitine is the principal driver of high TMAO levels.

Studies have found that people with a less diverse gut microbiome and more Firmicutes than Bacteroidetes gut bacteria were more likely to have elevated TMAO levels when eating a diet high in carnitine and choline.

Other factors linked to elevated TMAO include:

As I mentioned earlier, elevated TMAO levels have been linked to a variety of health conditions but there are two that I specifically want to highlight: cardiovascular disease and diabetes.

Over the last two decades, several large clinical studies have shown that elevated blood TMAO levels are associated with a greater risk of cardiovascular disease. In a meta-analysis of 19 studies with almost 20,000 people, high TMAO levels were associated with increased rates of cardiovascular diseases such as heart failure and stroke. Also, people consuming higher levels of TMAO precursors like carnitine and choline were 1.4 times more likely to suffer from heart failure, stroke or other heart diseases.

Elevated TMAO levels have also been associated with type 2 diabetes. A meta-analysis of 12 studies involving 15,000 people found that high circulating concentrations of TMAO were associated with an increased prevalence of diabetes. People with higher TMAO levels were approximately 50% more likely to have diabetes than people with lower levels.

The link between TMAO and CKD

So now we know that TMAO is linked to an increased risk of cardiovascular disease and diabetes, what about kidney disease?

Let’s take a look at what the research shows us:

Why is TMAO increased in people with CKD?

It’s not completely understood why TMAO levels are increased in people with CKD. It is thought that it may be due to a decrease in renal excretion of TMAO, but studies show that it’s more likely due to increased TMA gut production which may be related to higher TMA containing nutrient intake (choline and carnitine) or to CKD-associated gut dysbiosis.

It is well known that people with CKD are more likely to have gut dysbiosis for a number of reasons including slow intestinal transit time, delivery of undigested protein to the colon, decreased fibre intake, iron therapy, frequent use of proton pump inhibitors and antibiotics.

In people with CKD, there also appears to be increased metabolism of TMA to TMAO in the liver which will also contribute to elevated TMAO levels.

How does TMAO affect the kidneys?

There does however seem to be more of a direct effect. TMAO promotes the release of inflammatory factors throughout the body, this inflammation can directly cause damage to the kidney. TMAO also contributes to renal fibrosis. Renal fibrosis or scarring is a process that drives the progression of CKD to end-stage kidney disease

How do you know if you have high TMAO levels?

TMAO levels can be checked on a blood test however the test is relatively new so isn’t very commonly performed and the reference values are still being established. Hopefully, over time, we will start to see TMAO being measured routinely as part of a standard workup in people with kidney disease and cardiovascular disease.

Ok, so now we know that people with CKD are at a higher risk of having elevated TMAO levels and that elevated TMAO can contribute to the progression of kidney disease, as well as increase the risk of cardiovascular disease which is the most common cause of death in people with CKD. The next question is- what can you do to lower TMAO?

Factors that may decrease TMAO levels

Supplements that may reduce TMAO:

Make sure you discuss any new supplements with your healthcare practitioner before starting on them to make sure they are appropriate for your use.

There’s still a lot we don’t know about TMAO, but I think what we do know is pretty clear. Elevated TMAO levels are linked to a number of different health conditions and may be involved in the development and progression of CKD. Thankfully, there are a number of things we can do to lower TMAO levels in the body, primarily through altering our diet and looking after our gut health. We’ve said it before and we’ll say it again- all health begins in the gut and this is just another example of that.

Hopefully, you’ve found this information helpful, if you have, please let us know by clicking the ‘SHARE’ button below. If you have any questions, please head over to our Facebook page, and leave them in the comments.