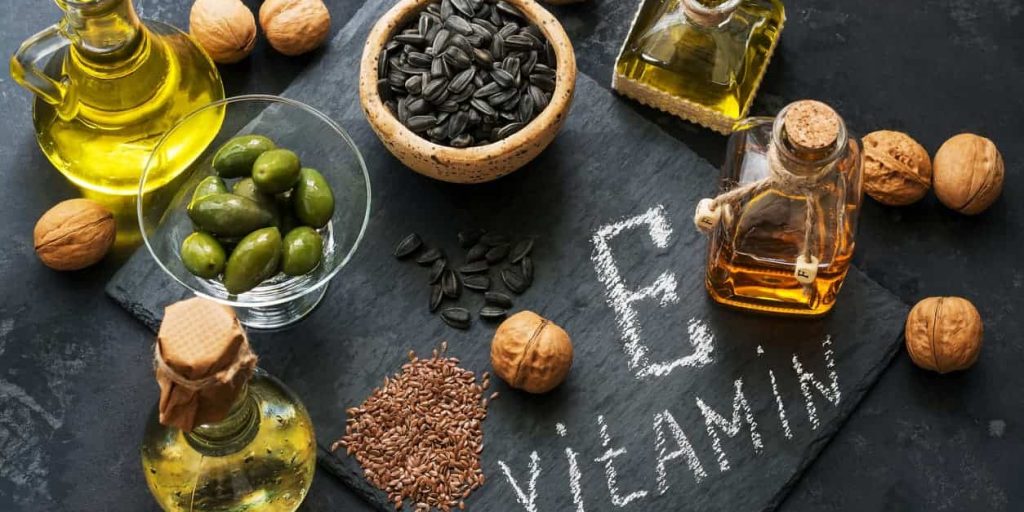 When discussing some of the important vitamins when it comes to people with CKD, you’re probably used to hearing about vitamin C, vitamin D, maybe vitamin B12. But what about vitamin E? Well, you may not know that vitamin E has a number of important actions that can be of great benefit in CKD. With that in mind, today I wanted to put a spotlight on vitamin E and in particular, on its protective role in both CKD and cardiovascular disease.

What is vitamin E?

Vitamin E is one of nature’s most potent fat-soluble antioxidants and is essential to the proper function of all major tissues and organ systems in the body. Humans are unable to synthesise vitamin E and must rely on oral (dietary and supplemental) delivery.

Vitamin E is naturally found in a number of vegetable oils, wheat germ, barley and certain types of nuts and grains. 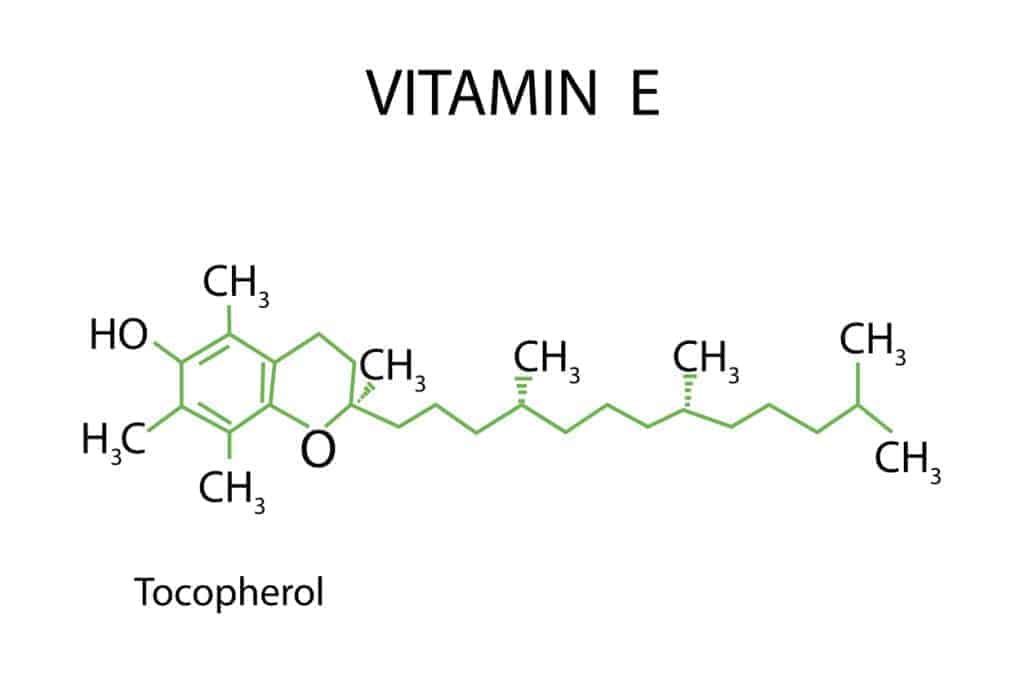 Vitamin E occurs naturally as a mixture of four tocopherols and four tocotrienols. So, it isn’t just a single molecule, it actually consists of eight isomers:

However, over the years, other vitamin E isomers were discovered, and they each have different and unique properties. Tocotrienols weren’t actually discovered until the mid-1960s, tocotrienols ability to lower cholesterol was first reported in the early 1980s and in the 1990s, tocotrienols were associated with a reduction of cardiovascular diseases and inhibition of cancers. While research into tocotrienols is still ongoing, it does appear to be a more effective antioxidant than alpha-tocopherol. 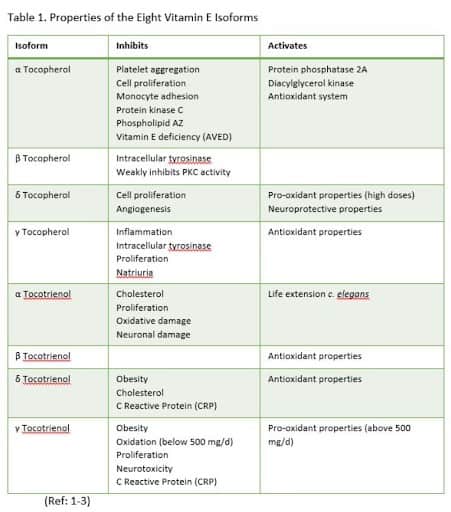 The main actions of vitamin E are:

– Protects against DNA damage and cancer

Vitamin E is protective against (CVD) for a number of reasons.

Vitamin E has been shown to inhibit 3-hydroxy-methylglutaryl-coenzyme A (HMG-CoA) reductase, the liver enzyme responsible for cholesterol synthesis. However, the problem in CVD is not cholesterol as such, but oxidised cholesterol. Oxidation of LDL cholesterol has emerged as the initiating step in the pathogenesis of atherosclerosis. Clinical trials with vitamin E suggest that it may decrease the susceptibility of LDL to oxidation by free radicals, thereby having an early positive effect on cardiovascular health.

For example, in one study, people given 100mg/day of tocotrienols had a decrease in total cholesterol by 20%, LDL-cholesterol by 25%, apolipoprotein B by 14% and triglycerides by 12%.

Inflammation is involved with every stage of CVD, so vitamin E’s anti-inflammatory actions support cardiovascular health. Vitamin E is also anti-thrombotic. This means that they inhibit platelet adhesion and aggregation which is involved in the development and progression of plaque in arteries around the body.

A double-blind placebo-controlled study involving 1035 patients with proven coronary atherosclerosis found that treatment with vitamin E reduced the risk of major cardiovascular events by 47% and of non-fatal myocardial infarction (heart attack) by 77%.

Now let’s take a closer look at the role vitamin E can play in the treatment of CKD.

Vitamin E’s primary role in the body is as an antioxidant which means that it plays a really important role in reducing oxidative stress.

Let’s do a quick recap on oxidative stress.

What is oxidative stress?

Oxidative stress is simply described as a physiological event where free radicals have damaged cells of the body and is well known to be involved in the development and progression of kidney disease, as well as the development of other complications seen in kidney disease including cardiovascular disease, anaemia, malnutrition and lowered immune function.

The kidneys are especially vulnerable to oxidative stress and damage from free radicals and prooxidants produced within the body. Renal proximal tubules contain a large number of mitochondria that are critical for the energy-demanding process of reabsorption of water and solutes. Mitochondria are the largest producers of free radicals, which in turn, increase the susceptibility of kidneys to oxidative stress-induced damage.

Oxidative stress is present at the early stages of CKD, increases progressively with renal function deterioration and is further increased by dialysis. Higher levels of oxidative stress are associated with an increased risk for mortality and cardiovascular disease.

Vitamin E as an antioxidant and anti-inflammatory

As well as being an antioxidant, vitamin E also has anti-inflammatory actions. Like oxidative stress, inflammation also contributes to the development and progression of CKD as well as other diseases such as diabetes and cardiovascular disease.

In a meta-analysis of 11 randomised controlled trials in patients receiving haemodialysis, supplementation with vitamin E was shown to significantly reduce MDA (malondialdehyde) which is a marker of oxidative stress and reduced CRP (C-reactive protein) which is a marker of inflammation in the body. Elevated CRP levels are associated with progression of CKD AND with risk for cardiovascular disease and cardiovascular events such as heart attack, stroke and sudden cardiac death.

An increased risk of thromboembolism (obstruction of a blood vessel by a blood clot) and stroke occurs when kidney function is decreased. Patients with CKD have an increased risk of thrombosis, including heart attack, stroke, DVT (deep vein thrombosis) and pulmonary embolism. Supplementation with vitamin E may reduce thromboembolic events. It does this in part by interfering with platelet adhesion, preventing the clumping of platelets in the blood and stopping platelets from sticking to blood vessels (including in the kidneys) causing blood clots to form.

Renal fibrosis or scarring occurs in virtually every type of CKD and is a direct consequence of the kidney’s limited capacity to regenerate after injury. Scarring results in a progressive loss of renal function, and if not prevented or treated, can ultimately lead to end-stage renal failure and a requirement for dialysis or transplant.

Transforming growth factor-beta (TGF-beta) is a signalling molecule that plays an important role in causing renal fibrosis. Vitamin E plays a role in protecting against renal fibrosis by inhibiting the activity of TGF-beta. Pretty impressive for a vitamin supplement right?

Vitamin E has also been shown to be of benefit for people with diabetic kidney disease.

A recent study was conducted on people with stage 3 diabetic kidney disease. One group was given 400mg of tocotrienol-rich vitamin E a day and the other group were given a placebo. The group given the vitamin E supplement had significantly improved kidney function throughout the study period (12 months) as shown by a decrease in creatinine and an increase in eGFR.

Some other benefits of vitamin E for people with CKD include:

Are we getting enough vitamin E?

While true vitamin E deficiency is rare, and vitamin E insufficiency is surprisingly common. It has been estimated that more than 90% of Americans do not meet daily dietary recommendations for vitamin E. 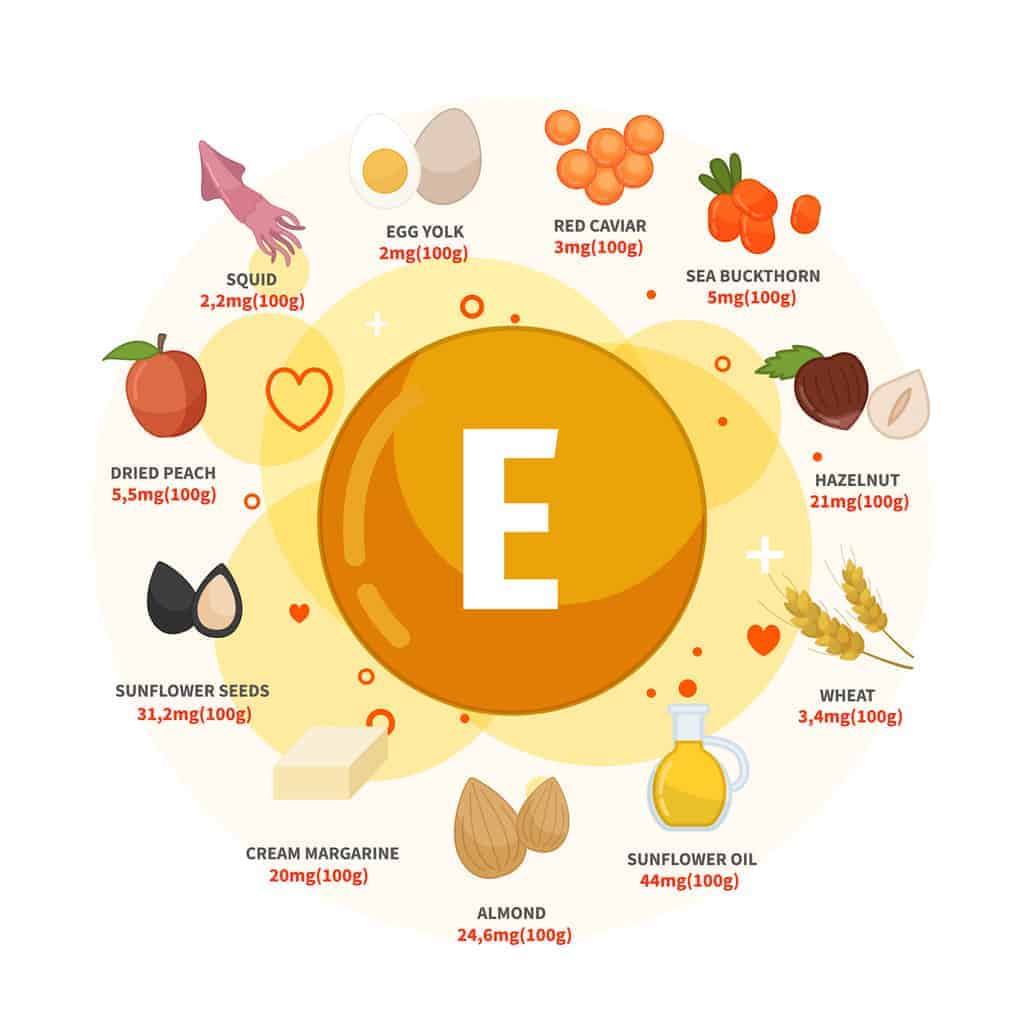 Remember at the beginning of this article I explained that each of the isomers of vitamin E has its own unique actions? Well, if you’re only taking one of the eight isomers, you’re obviously going to miss out on everything vitamin E has to offer. Makes sense right?

Also, if you’re only taking alpha-tocopherol alone, you are going to miss out on the many important actions of vitamin E tocotrienols.

Vitamin E tocotrienols are starting to be researched more and they may be more potent antioxidants than tocopherols and may possess greater neuroprotective, anti-cancer and cholesterol-lowering properties than tocopherols.

So, what does this mean?

People with impaired blood clotting inherited bleeding disorders or a history of haemorrhagic stroke should not take vitamin E unless under medical supervision.

Also, concomitant use of vitamin E and blood-thinning medication such as warfarin, Xarelto, apixaban etc might increase the risk of bleeding so vitamin E should be avoided in anyone on these medications or only used under medical supervision.

Don’t forget, make sure you discuss any new supplements with your healthcare professional before starting on them to ensure they are appropriate for your use.

So there we are, a bit of a spotlight on vitamin E and its many benefits for people with not just CKD but cardiovascular disease as well. Hopefully, I’ve been able to highlight some of vitamin E’s primary actions and give you a better understanding of why we do recommend it for some people with CKD.

If you’ve found this article useful, please let us know by clicking the ‘SHARE’ button below, or head over to our Facebook page and leave us a comment.