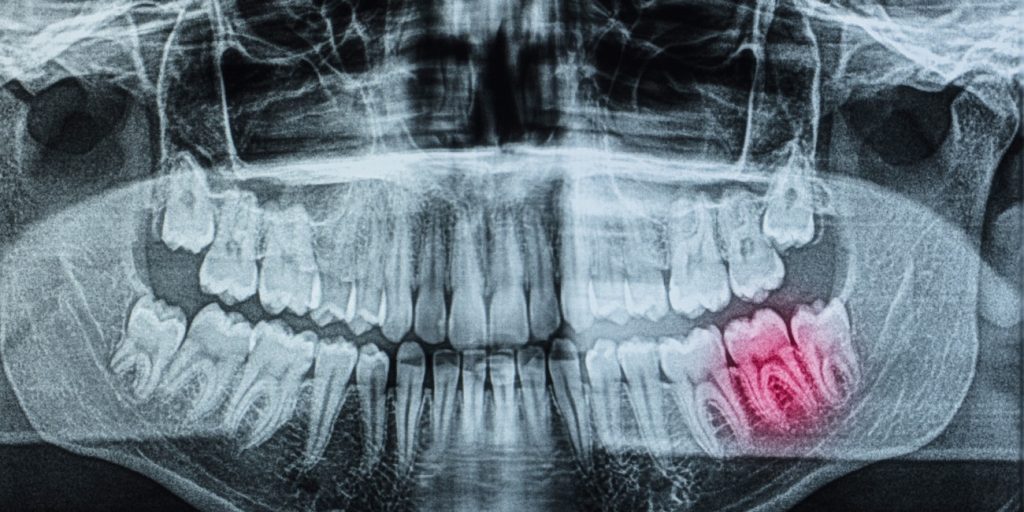 Oral health is not only about our teeth!

Let’s go through some of the theories.

What is Periodontal Disease?

Periodontal (gum) disease is an infection in the tissues that support and hold your teeth in place. It is usually caused by poor brushing and flossing which allows plaque to build up on the teeth and harden. As plaque hardens it becomes tartar which is more problematic. As the disease progresses it will lead to sore, bleeding gums, painful chewing and eventually if unchecked, tooth loss.

Periodontal disease is a non-communicable disease, it affects 11.2% of the world’s population and is the sixth most prevalent disease when it’s at its most severe. A non-communicable disease is classified as a non-infectious health condition that can not be spread from one person to another, and it’s chronic in nature. It is evident these noncommunicable diseases such as kidney disease are becoming increasingly prevalent due to our aging population, increased sedentary lifestyles and poor dietary habits. Evidence suggests that 92% of older adults have at least one chronic disease.

The mouth is full of bacteria, mucus and other particles that form the ‘sticky’, transparent film which appears on your teeth.  This film contains harmful oral bacteria that feast on sugar, starches, left-over food and beverages. If this plaque is not removed it will irritate the gums causing gingivitis. Untreated gingivitis will lead to periodontitis, the severe form of gum disease. We know good dental hygiene is important in the removal of tartar and seeing your dentist on a regular basis will help ensure once the plaque turns into the hardened form, it is removed.

Risks for gum disease include:

Warning Signs, Signs and symptoms of gum disease may include:

Effects of Periodontitis on Kidney Function

Rather than seeing the mouth as a separate organ, it can be seen as the doorway to the body, it is the access point where unwanted bacteria can enter the bloodstream via the gums. It is common for individuals to be unaware they even have gum disease and/or may ignore some of the early signs and symptoms. If damage to the gums remains unchecked it becomes a higher risk for the rest of the body. A recent study in The Journal of Clinical Periodontology adds further evidence in supporting the link between periodontal disease and other chronic health issues. The study involved 770 patients with stage 3-5 (pre-dialysis) chronic kidney disease from an ongoing cohort study were used. Using structural equation modelling (SEM), the cross-sectional study aimed to explore the relationship between periodontal inflammation (PI) and renal function. The authors analysed whether PI affected renal function and vice versa. The authors found a 10 % increase in PI resulted in a 3.0% decrease in renal function and a 10% decrease in renal function resulted in a 25% increase in PI. Authors concluded PI was a source of oxidative stress in those with CKD and the link between kidney disease and periodontitis was evident.

I have discussed the link between periodontitis and kidney disease, now let’s have a look at the connection between heart disease and periodontal disease. Heart disease refers to a broad set of health conditions, this includes heart attack and stroke. Research shows that people with poor oral health experience a higher rate of cardiovascular problems than those with good oral health. Periodontal disease can also exacerbate existing heart issues.

Gum disease and the connection to heart disease – Harvard Health

The connection between periodontitis and cardiovascular disease has been made clear as many studies have now established the link. Poor oral health and gum disease increase the risk of developing cardiovascular issues. There are theories that assert a direct relationship between the two conditions, they are as follows:

The link between periodontal disease and cardiovascular disease: How far we have come in last two decades ? – PMC (nih.gov)

Vitamin D is either consumed via our diet, taken as a supplement or produced by the body via a complex process that begins when the invisible rays of ultraviolet B (UVB), part of the light spectrum gets absorbed by the skin. Research has found a deficiency in vitamin D can lead to the progression of periodontal disease. A 2018 study showed that a sufficient intake of Vitamin D can decrease the risk of gingivitis and chronic periodontitis as it possesses immunological, anti-inflammatory and antiproliferative effects. It is also important for bone metabolism, aveolar bone resorption and in preventing the loss of teeth. Vitamin D increases the antibacterial defence of gingival epithelial cells, decreases inflammation and can increase post-operative wound healing after periodontal surgery.

The Relationship between Vitamin D and Periodontal Pathology – PubMed (nih.gov)

A blood test via your GP will help determine your vitamin D levels.

Nutrients | Free Full-Text | The Role of Nutrition in Periodontal Health: An Update (mdpi.com)

Nutrients | Free Full-Text | The Impact of Diet, Nutrition and Nutraceuticals on Oral and Periodontal Health (mdpi.com)

Antioxidants are molecules that fight free radicals in the body. If free radicals become too high, they can cause harm, and the imbalance between oxidants and antioxidants has been linked to many illnesses. Like any other area of our body, the oral cavity experiences inflammation and injury due to tissue trauma and disease. During the process of inflammation, reactive oxygen species (ROS) are produced by immune cells when stimulated by pathogens. These ROS and reactive free radicals can inflict cellular and tissue damage.

The periodontium can enter a state of oxidative stress due to inflammation caused by disease or trauma; this is where antioxidants may play an important part. Antioxidants have the ability to reduce the severity of disease by scavenging these ROS. A 2013 study found a significant relationship between oxidant status and periodontal health, the study found oxidative stress plays a significant role in periodontitis and the tissue damage that is associated.

The key message of the study was that smoking, infection, UV light and high temperature increase the production of free radicals, so, if possible, these should be avoided. Consumption of foods that contain antioxidants such as vitamin C, E, Beta-carotene, selenium and manganese should be encouraged to help fight oxidant damage to periodontal tissue. 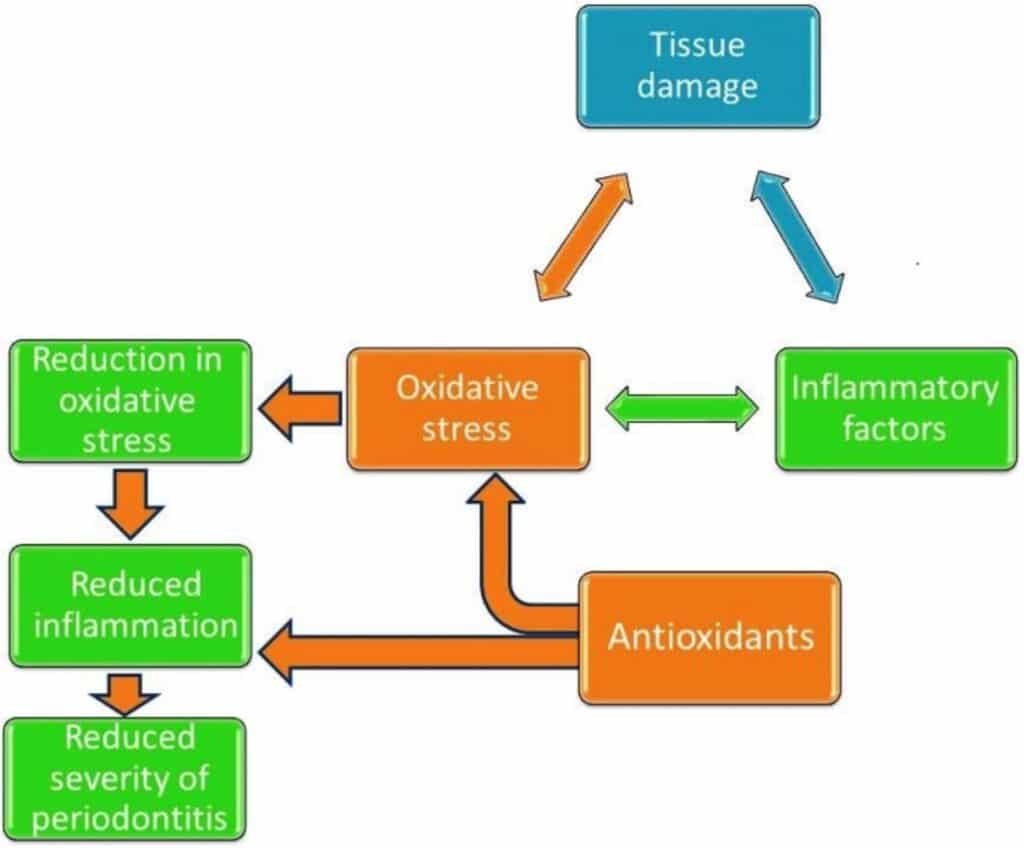 Lycopene is another powerful antioxidant, it is the red pigment found in foods such as tomatoes, watermelon and carrots. Studies have suggested lycopene supplementation may improve periodontal health and may also have a therapeutic role in the role of periodontitis.

The Relationship between Vitamin C and Periodontal Diseases: A Systematic Review – PubMed (nih.gov)

The Role of Nutrition in Periodontal Health: An Update – PMC (nih.gov)

There is so much information and research on this topic and as studies in this area of health are ongoing, the hope is professionals can work with and plan out prevention strategies together for patients with these health concerns.

I hope you found some of the information useful. if so feel free to share this article with friends and family using the links below or head over to our Facebook page and leave us a comment.