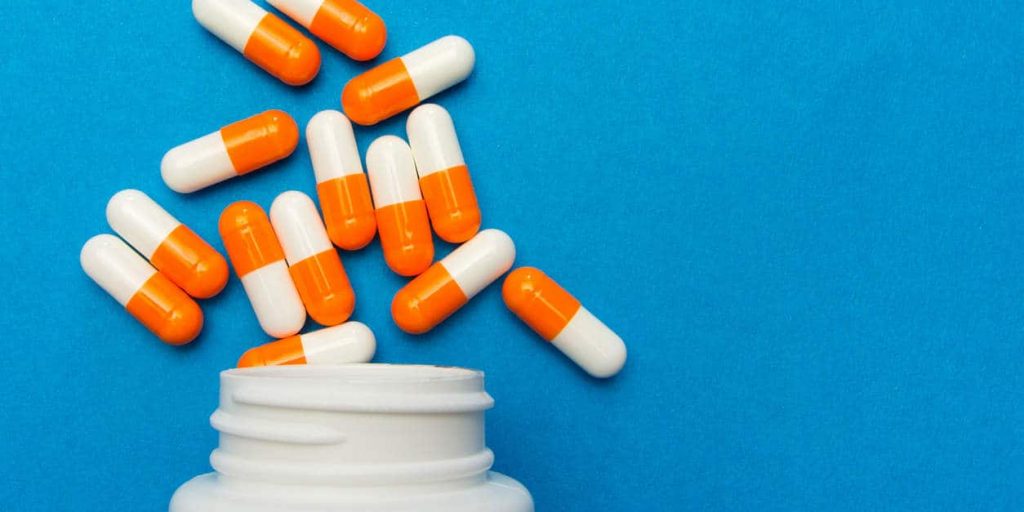 Antibiotics… Are They Safe if You Have Chronic Kidney Disease?

Many drugs have the ability to damage the kidneys and some are better known for doing this than others. Certain antibiotics fall into this category and are classified as nephrotoxic medications. Let’s take a closer look at which antibiotics carry a greater risk of causing kidney damage, how this happens and importantly what you can do to reduce this risk.

Firstly though- What are antibiotics?

Antibiotics are powerful medicines that fight certain infections and can save lives when used properly. They either stop bacteria from reproducing or destroy them. Before bacteria can multiply and cause symptoms, the immune system can typically kill them. White blood cells attack harmful bacteria and, even if symptoms do occur, the immune system can usually cope and fight off the infection.

Sometimes however, the number of harmful bacteria is excessive and the immune system cannot fight them all. Antibiotics are useful in this scenario.

Antibiotics have not only saved peoples’ lives, but they have also played a pivotal role in achieving major advances in medicine and surgery. They have successfully prevented or treated infections that can occur in patients who are receiving chemotherapy treatments; who have chronic diseases; or who have had complex surgeries such as organ transplants, joint replacements, or cardiac surgery.

While antibiotics have many benefits and have no doubt saved millions of lives, they are not without significant concerns and side-effects.

It might surprise you to know that the Centers for Disease Control and Prevention (CDC) estimates that approximately half of the 100 million antibiotic prescriptions written each year in the United States are unnecessary. They are not effective treatments for the common cold, flu or other viral infections, and taking them when they are not needed can be harmful in two ways.

Side-effects of antibiotics range from mild to potentially life threatening. According to the Centers for Disease Control and Prevention (CDC), adverse reactions to antibiotics are responsible for 1 in 5 medication-related emergency room visits.

More common side effects include:

More serious side effects include: 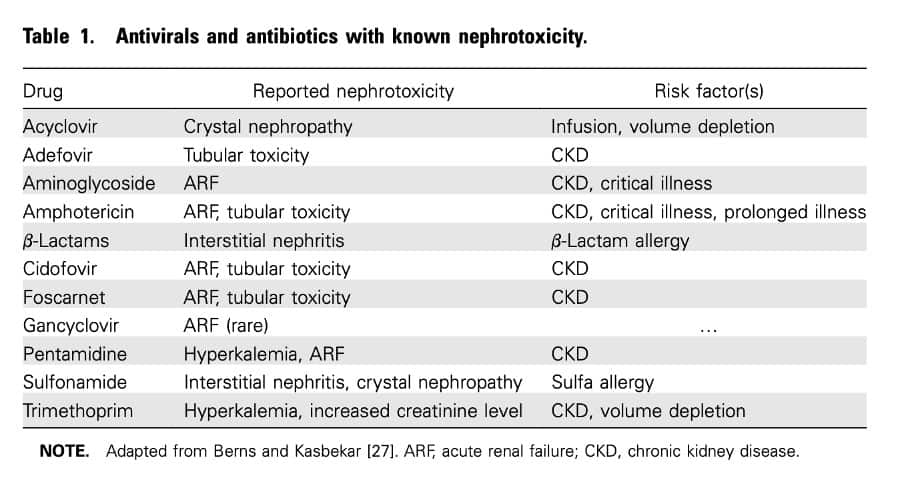 Antibiotics are the most common drugs implicated in reports of drug-induced nephrotoxicity. Certain classes of antibiotics are better known for their nephrotoxic potential, and they include:

The way that antibiotics cause kidney injury varies depending on the antibiotic involved and the consequences vary from mild forms of tubular injury to significant deterioration of kidney function requiring acute renal replacement therapy (dialysis).

Here are some of the consequences of nephrotoxic antibiotics:

AKI from antibiotics is more likely to occur when antibiotics are administered intravenously but it can also occur with oral antibiotic use.

The longer-term consequences of AKI vary. In some cases, AKI is reversible and kidney function returns to baseline following removal of the agent causing the damage or following treatment. However, this isn’t always the case, and some people go on to develop CKD. Research shows that experiencing some form of AKI has a high risk for developing CKD within 10-15 years.

People with CKD are also at a higher risk of developing AKI from any cause, including antibiotic use and growing evidence shows that AKI can contribute to the progression of CKD. For this reason people with CKD need to be particularly careful when it comes to taking any medications and particularly those that have the potential to cause kidney damage.

Who is at risk of developing AKI from antibiotics?

Anyone has the potential to develop AKI from antibiotics, but studies have shown that certain things increase the risk of developing AKI:

Obviously the best way to prevent kidney damage from antibiotics is to avoid taking them altogether but that isn’t always possible. While there’s no doubt that antibiotics are over-prescribed and in situations where they are completely unnecessary and of no use (eg. viral infections), there are certainly times when antibiotics aren’t only necessary but may be life-saving.

In these situations, the risk of developing AKI can be reduced by:

So what can you do to reduce the risk of antibiotic induced nephrotoxicity?

Only take antibiotics when it is truly necessary

One of the major reasons for the overuse of antibiotics include pressure from patients and the willingness of health care providers to prescribe antibiotics for common ailments that would clear up on their own. Although antibiotics are not effective against colds, flu and other viral infections, they continue to be given to patients who ‘need’ to take a prescription medication for these conditions.

Supporting the function of your immune system is one way to try and avoid needing antibiotics in the first place.

In every case of impaired kidney function, either acute or chronic, oxidative stress plays a key role in kidney damage. Reports have shown that reactive oxygen species and reactive nitrogen species are elevated in antibiotic nephrotoxicity and are responsible for a large amount of the damage caused by antibiotics.

For this reason all antioxidants have the capacity to prevent or reduce damage from nephrotoxic medications such as antibiotics and certain herbs and nutrients have been researched and shown to be effective in protecting the kidneys from damage.

Well known for its antioxidant and anti-inflammatory properties, curcumin may have a protective effect against the development of antibiotic induced nephrotoxicity. Multiple animal studies have shown that curcumin protects kidneys from gentamicin-induced AKI by protecting against oxidative stress and death of renal tubular cells. Administering turmeric alongside gentamicin resulted in a remarkable improvement of renal function compared to gentamicin alone.

There have been a number of animal studies showing that Schisandra exerts a kidney protective effect against nephrotoxic medications. It does this by inhibiting oxidative stress, reducing inflammation and inhibiting cell death in the kidneys.

Treatment with Schisandra protected against gentamicin induced nephrotoxicity in rats, not only did it lower creatinine and blood urea nitrogen (BUN) levels but it also increased the activity of key antioxidant enzymes in the kidneys which are vital for protecting the kidneys from damage. 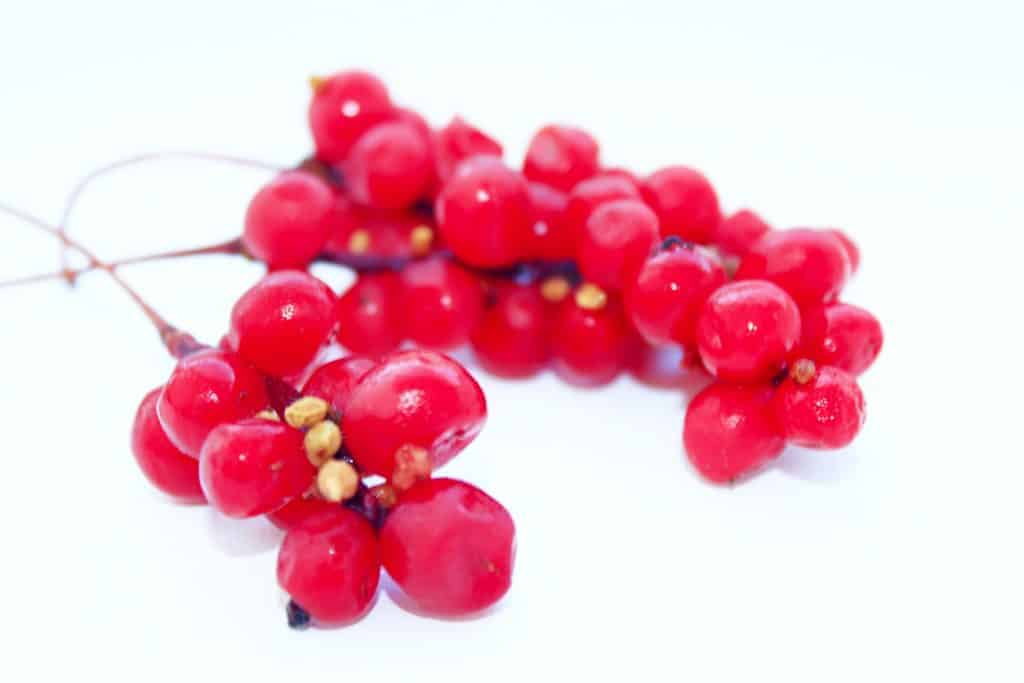 Vitamin E is a potent fat-soluble antioxidant. Animal and human studies have demonstrated a beneficial effect of vitamin E in prevention of kidney damage induced by drugs including antibiotics. When vitamin E was given to adults receiving vancomycin there was a significant reduction in blood urea nitrogen (BUN) and while there were 12 instances of AKI in the vancomycin alone group, no-one in the vancomycin with vitamin E group developed AKI.

NAC is a well-known antioxidant that boosts glutathione production, promotes detoxification and acts directly as a free radical scavenger. NAC is used in hospitals to protect the kidneys from contrast dye which is known to cause nephrotoxicity and has the strongest evidence for prevention of acute kidney injury in humans.

A study was conducted in adults that showed that NAC could prevent vancomycin induced nephrotoxicity shown by prevention of increase in serum creatinine and BUN. Animal studies have also shown that NAC prevented renal tubular damage and improved kidney histology.

Make sure you discuss any new supplements with your healthcare practitioner before starting on them to make sure they are suitable for your use.

There’s no doubt that antibiotics in certain circumstances are necessary and can be life saving BUT they also come with their own risks and potential side-effects. The good news is that there are steps you can take to support your immune system and reduce your need for antibiotics and if they do become necessary there are herbs and nutrients that can help reduce or prevent damage to your kidneys.

Hopefully you’ve found this article helpful, if you have, I’d love you to let me know by clicking the ‘SHARE’ button below.