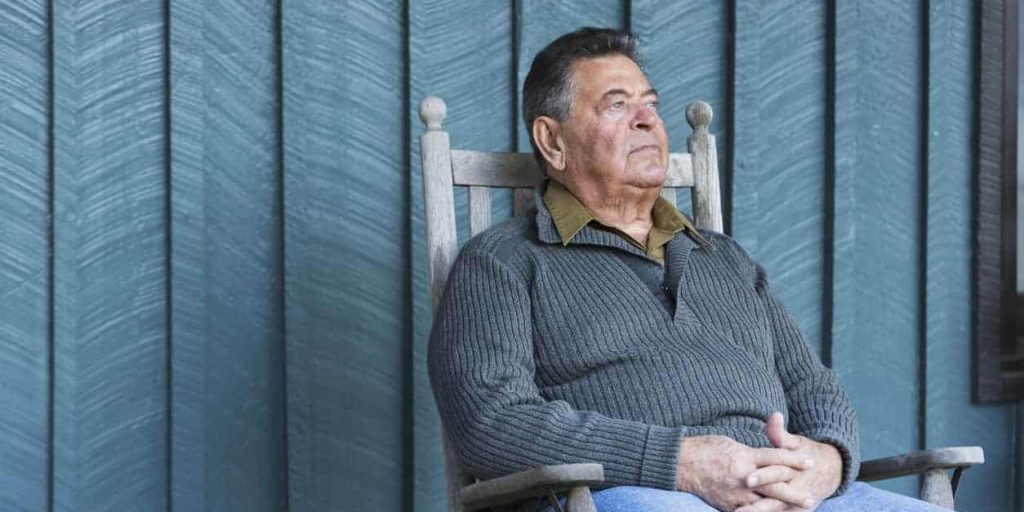 If you or someone you know is suffering from depression, you are not alone. It is estimated that 5% of the adult population worldwide suffer from depression. Recent studies have shown that people with CKD have rates of depression up to 3 times higher than those in the general population so this is not something that can be ignored.

Because depression is so common in people with CKD, it’s a really important issue to discuss. Today, I wanted to go through some of the symptoms of depression, risk factors, potential causes and explain why people with CKD are at a higher risk of developing depression. And finally, discuss some strategies to help treat depression.

But even more important than any of that, what I really want to get across is this:

Unfortunately, there is still quite a lot of stigma surrounding mental illness.

More than half of people with mental illness don’t receive help for their disorder and many delay seeking treatment due to concerns about stigma, discrimination, and judgement.

As someone who suffers from depression myself, I’m very aware of the stigma surrounding mental illness and it took me a long time to reach out for help. But one of the best ways to break down this stigma is to talk about it. I can’t tell you the number of times I’ve done this, only to have the other person disclose their own mental health struggles, or that of their family or a friend.

Depression is far more common than people realise. The more we talk about it, and get the help and support we need, the faster we will break down the stigma and judgement. 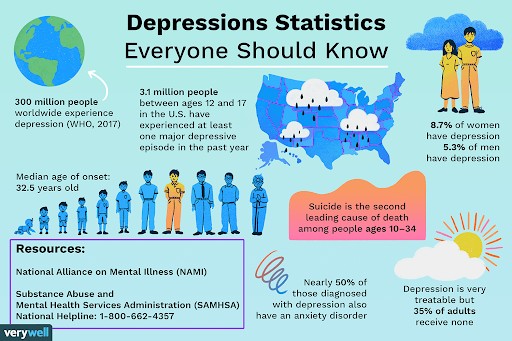 There’s no one pattern to depression, and the condition can vary in progression from person to person. Symptoms may gradually go from mild, such as choosing to stay home to watch TV instead of going out for a walk with a friend, to more severe, such as not even getting out of bed to shower or persistent thoughts of suicide.

To help you recognise depression, whether in yourself or a loved one, here are some of the more common symptoms:

If any of these symptoms ring true for you, please go and see your primary care doctor or general practitioner. Without treatment, depression won’t fade away on its own. Even if you white-knuckle it through your first episode of depression, your chance of another recurrence is more than 50%. Meaning, you’re going to want to deal with this sooner rather than later.

Factors that seem to increase the risk of developing or triggering depression include:

Have you ever wondered what causes depression? Perhaps you have been diagnosed with depression, and that’s made you question why some people get depressed and others don’t.

Depression is a complex disease. No one knows exactly what causes it, but it can happen for a variety of reasons.

The most common belief about depression is that it’s caused by a chemical imbalance in the brain. While it is true that low levels of neurotransmitters like serotonin or noradrenaline (norepinephrine) can play a role in depression for some people, this is only one piece of a much larger puzzle. In fact, the chemical imbalance theory has not been proven as the main cause of depression in over 50 years of research.

Antidepressant medications like SSRIs (eg. Zoloft, Lexapro, Prozac) target chemical imbalances in the brain, such as low serotonin. While this has been helpful for some people, one study found that only 46% of patients get fully well when receiving a combination of antidepressants and talk therapy.

So what else is involved?

There is clear evidence showing that emotional and social stress can lead to depression. While it may seem intuitive how stress can contribute to symptoms of depression, stress doesn’t just make us feel overwhelmed and frazzled, it changes our biology.

Stress can trigger the release of hormones and other chemicals that affect many systems in the body. For example, stress can lead to inflammation, changes in blood sugar and the gut microbiome, and more.

When our bodies are not healthy, this response to stress can become exaggerated, leading to chronic or higher levels of inflammation and other changes. This can set the stage for depression.

In addition to chemicals, our brain cells also communicate through electrical impulses called brain waves. These waves vary in speed and are associated with different activities, from problem-solving to sleep. Too many slow brain waves in the from of the brain have been associated with major depressive disorder, lack of motivation, and feeling sad.

Inflammation is the body’s response to a perceived threat, such as a cut or infection. When it becomes widespread or chronic, it can wreak havoc in the body and brain. In fact, studies show that chronic, low-grade inflammation is associated with increased risk for depression and other mental illnesses. Possible sources of inflammation include poor diet, stress, changes in gut microbiome, and certain medical illnesses.

The gut is sometimes called the second brain because it has a rich network of nerve cells and neurotransmitters. Not surprisingly, disruptions in gut health can impact how we feel and think. About 70% of our immune system is housed in the gut, so when immune cells sense a breach in the integrity of the gut lining, they sound alarm by spreading inflammation throughout the body.

Hormones (eg. cortisol, oestrogen, thyroid hormones) are chemicals that are produced by the glands and travel through the blood to other parts of the body, including the brain. These chemicals are critical for brain function and health, and imbalances in certain hormones can lead to low mood and depression.

Food is more than energy for the brain. It also provides the building blocks for neurotransmitters and brain cells, as well as antioxidants to protect against inflammation. Not surprisingly, there is a growing body of evidence supporting a link between what we eat and our mental health. Eating high quantities of foods that cause inflammation, such as processed foods, sugar and alcohol, can increase the risk of depression.

Several studies have found that people who suffer from major depression for several months actually have measurably smaller hippocampus regions in the brain. If the hippocampus reduces the rate at which it produces new neurons for an extended period, it will begin to shrink. This directly fits the notion that depression is related to a low rate of neuronal production in the hippocampus and other areas of the brain associated with learning and arousal.

In fact, the efficacy of antidepressants may actually be due to their ability to boost neurogenesis in the hippocampus, and this might also account for why antidepressants typically take between two and six weeks to show any benefit, the same amount of time it takes for nerves to grow and form new connections in our brain.

Link between depression and CKD

Depression is highly prevalent among people with CKD and is associated with poor quality of life and increased mortality. Recent studies have shown that patients with CKD have rates of depression up to 3-4 times higher than those in the general population and 2 to 3 times higher compared to people with other chronic illnesses.

Depressive symptoms in people with CKD have also been significantly associated with fatigue, pain, itchy skin, sleep disturbances, sexual dysfunction, increased hospitalisation, and acute kidney injury. In addition, the presence of depressive symptoms is associated with a faster rate of decline in kidney function, progression to end stage renal disease and higher mortality. As you can see there are numerous reasons why it’s important that those with depression seek out support and treatment.

Depression is often under-diagnosed in patients with serious physical illness and CKD is no exception. There are a number of reasons for this including a lack of knowledge or confidence from medical practitioners when asking about mental health symptoms, as well as a focus, both from the medical staff and patients, on physical symptoms alone. An additional problem is the overlap between the physical symptoms of depression and those of the underlying medical illness.

One obvious question is, why are people with CKD at a higher risk of developing depression?

Why is depression more common in CKD? 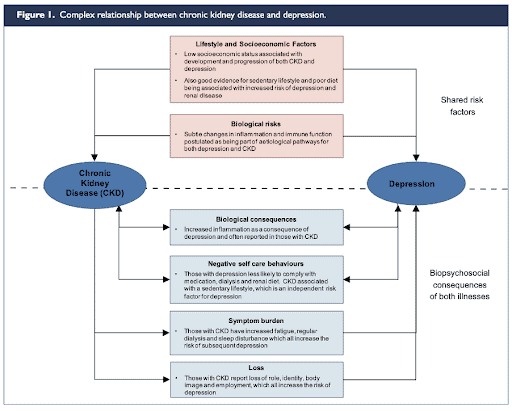 There is no one clear answer to this question but rather it’s likely to be due to a variety of reasons. In discussing the relationship between depression and CKD, it can be helpful to consider shared risk factors, as well as the biopsychosocial consequences of both illnesses.

Biopsychosocial consequences of both illnesses:

I’ve broken up this section into dietary advice, lifestyle advice and herbal and nutritional supplements but here’s the thing, I fully understand how difficult even the smallest things can feel when you’re depressed so I know that this list might feel overwhelming to you at the moment.

If that’s the case, just start with one thing, pick one thing from this list, and start with just putting this one thing into practice, then, once you’ve achieved that, choose one more thing, and work through it that way. As one of the practitioners I used to see always told me: ‘Little by little, a little becomes a lot.’ And it’s true.

Don’t forget to speak to your healthcare provider before starting any new herbal or nutritional supplements to ensure they are appropriate for your use, particularly if you are taking any pharmaceutical medication.

Another really important part of treatment for depression is some sort of psychological counselling. There are multiple different types of therapy that can help with depression, and it might take you a few different tries to find the right type of therapy AND the right health professional, so my biggest advice is to keep trying until you find the right person and the right approach for you.

Firstly, if you got to the end of this article, well done- I know it was a long one! But I just feel like it’s such an important topic to discuss, that I didn’t want to leave anything out. Once again, I really want to reiterate three important points:

If you’re currently suffering in silence, please, take this article as a sign that it’s time to speak up and seek out the support that you deserve. And for those who have already done this- well done, I know it’s not an easy thing to do. Keep taking little steps forward, every day. Remember, little by little, a little becomes a lot.

If you found this article helpful, please let us know by clicking the ‘SHARE’ button below, or even better, head over to our Facebook page and leave a comment. We’d love to hear from you.

“You will feel better than this, maybe not yet, but you will. You just keep living until you are alive again.”